Despite calls for them to publish the complete article, its editor, Lynne McTaggart, has not obliged, so I will. END_OF_DOCUMENT_TOKEN_TO_BE_REPLACED

END_OF_DOCUMENT_TOKEN_TO_BE_REPLACED

In recent times, the two main UK chiropractic associations, the British Chiropractic Association (BCA) and the McTimoney Chiropractic Association (MCA), have come under intense scrutiny. The BCA was brought to its knees by the misconceived libel case it brought against the science writer and broadcaster, Simon Singh, and, as a direct result of it, the MCA suffered the humiliation of having a confidential email to its members leaked online which revealed that it had urged all of them to take down their websites as they were a real threat to both them and their practices. By comparison, the Scottish Chiropractic Association (SCA) has enjoyed a relatively uncontroversial existence. Until now.

END_OF_DOCUMENT_TOKEN_TO_BE_REPLACED

I have never been 100%  sure of the exact numbers of complaints of mine the General Chiropractic Council had to deal with.

I certainly submitted a list of 524 names, but the number changed as the complaints were processed. Quite a few chiros were added to my initial list because they were at the same clinic as another I had complained about and some have been removed for various reasons. Then there were more than a few issues of chiros changing their names, moving clinics, moving abroad and other things that made it difficult to keep track, so I didn’t bother to keep my list absolutely up to date. There didn’t really seem any point in fretting over the minutiæ. After all, the GCC are a statutory regulator and they could be trusted to keep track because it was their statutory duty to deal with these things, couldn’t they?

END_OF_DOCUMENT_TOKEN_TO_BE_REPLACED 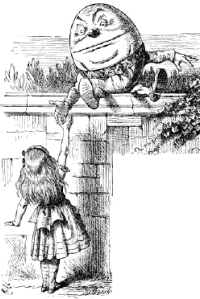 The phrase Humpty Dumpty chiropractic cropped up in a Google Alert a few days ago. It was the fitting title of an editorial (cached) in the December 2010 issue of Clinical Chiropractic, which discussed the slippery and nebulous meaning of vertebral subluxation complex (VSC).

For those who don’t remember their childhood, in Lewis Carroll’s Through the Looking Glass, Humpty Dumpty is discussing the meaning of words with Alice. HD remonstrates:

‘When I use a word,’ Humpty Dumpty said in rather a scornful tone, ‘it means just what I choose it to mean — neither more nor less.’

Such equivocation is typical of on-line conversations with chiropractic supporters discussing the VSC, but it applies elsewhere as well.

END_OF_DOCUMENT_TOKEN_TO_BE_REPLACED

Where the evidence leads

Google Alerts is a very useful tool for skeptics. It sends you an email whenever the word or phrase you’ve asked for crops up in their searches of news, blogs or other websites. They are excellent for keeping tabs on what’s going on by helping you track new stories and hits.

Naturally, I have one set up for the General Chiropractic Council (GCC), just to see where they crop up on web sites and in the news.

A few days ago, I received a Google Alert about a page that had been recently updated, although the mention of the GCC was from some time ago. It linked to a decision by the Press Complaints Commission (PCC) about complaints made by the GCC against the Daily Telegraph, the Daily Mail and the Guardian about articles published on 9 November 2007.

According to the GCC, the articles said:

Nothing new there, then.

END_OF_DOCUMENT_TOKEN_TO_BE_REPLACED

This week is the first anniversary of the report Free Speech is Not for Sale, which highlighted the oppressive nature of English libel law. In short, the law is extremely hostile to writers, while being unreasonably friendly towards

Credit where credit’s due

How could anyone possibly think that I would complain to the Advertising Standards Authority about misleading claims for AltMed?

Someone objected to claims being made by the Craniosacral Therapy Association (CSTA) in one of their leaflets.

END_OF_DOCUMENT_TOKEN_TO_BE_REPLACED

Shortly after that, Fiona Godlee, Editor on the BMJ, commenting on an article by Prof Edzard Ernst, said:

But in response to our recent editorial by Evan Harris (doi:10.1136/bmj.b2254), the vice president of the BCA, Richard Brown, has now presented the evidence (doi:10.1136/bmj.b2782). He writes, “There is in fact substantial evidence for the BCA to have made claims that chiropractic can help various childhood conditions” and lists 18 references. Readers can decide for themselves whether or not they are convinced. Edzard Ernst is not (doi:10.1136/bmj.b2766). His demolition of the 18 references is, to my mind, complete.

This, presumably, was the best evidence the BCA could muster and it was left in tatters by those more knowledgeable about science and robust trials.