The NHS Choices website has the tag line “Your health, your choices” and aims to inform the public:

NHS Choices is the online ‘front door’ to the NHS. It is the country’s biggest health website and gives all the information you need to make choices about your health.

They provide first-rate information about your health, illnesses, careers, etc as well as helping you find a local GP or other NHS services.

They also have some pages on alternative therapies such as homeopathy. On the page for homeopathy, they say:

Homeopathy is a type of complementary and alternative medicine (CAM). CAMs are treatments that are not based on conventional scientific theories. Other CAMS include:

It’s good to see them place chiropractic firmly along side homeopathy, acupuncture and faith healing.

END_OF_DOCUMENT_TOKEN_TO_BE_REPLACED

The GCC’s Bronfort report is starting to have an effect. And not before time.

The British Chiropractic Association removed their Happy Families leaflet from their website last year, but it is still on the websites of some chiropractors (for example Weston Chiropractic Clinic here (cached).

Over the intervening months, various chiropractors have removed loads of claims from their websites, with one of them even asking Skeptic Barista if he could check they had made the appropriate changes!

As part of the ongoing complaint process, I have received observations on my complaints from 290 chiropractors (so far) and some have included ‘before and after’ screenshots of their websites, showing what they have removed or changed. (Don’t worry, I intend to write about what’s been happening and what the current position of my complaints is very soon.)

Now, presumably as a result of the Bronfort report, the BCA have removed various statements from their website over the last few days.

END_OF_DOCUMENT_TOKEN_TO_BE_REPLACED

Do you know who your MP is?

If you don’t, you can find him or her on the excellent They Work for You website.

Why is this important? Well, in case you’ve been hibernating all winter (and who could blame you), there’s going to be a General Election fairly soon and there’s no better time to lobby your MP and find out what his/her views are on important issues.

In case you’re struggling to think of something to ask your MP, here’s a suggestion:

END_OF_DOCUMENT_TOKEN_TO_BE_REPLACED

Curbing the quacks & protecting the public

In November last year, there was speculation that the ASA’s remit might be extended to cover claims on advertisers’ own websites, rather than just third-party online adverts (the so-called digital remit).

In launching their new Code of Advertising Practice today (which comes into force on 1 September 2010), the ASA/CAP have given more details:

END_OF_DOCUMENT_TOKEN_TO_BE_REPLACED

EBH [Evidence-Based Healthcare] is about doing the right things for the right people at the right time. It does so by promoting the examination of best available clinical research evidence as the preferred process of decision making where higher quality evidence is available. This reduces the emphasis on unsystematic clinical experience and pathophysiological rationale alone while increasing the likelihood of improving clinical outcomes. The fact that randomized clinical trial (RCT) derived evidence of potentially effective interventions in population studies may not be translated in a straight forward manner to the management of individual cases is widely recognized. However, RCTs comprise the body of information best able to meet existing standards for claims of benefit from care delivery. The evidence provided by RCTs constitutes the first line of recommended action for patients and contributes, along with informed patient preference, in guiding care. (page 4)

END_OF_DOCUMENT_TOKEN_TO_BE_REPLACED

The first photo was taken in East Kilbride shopping centre on 16 August 2009. The second was taken this morning. 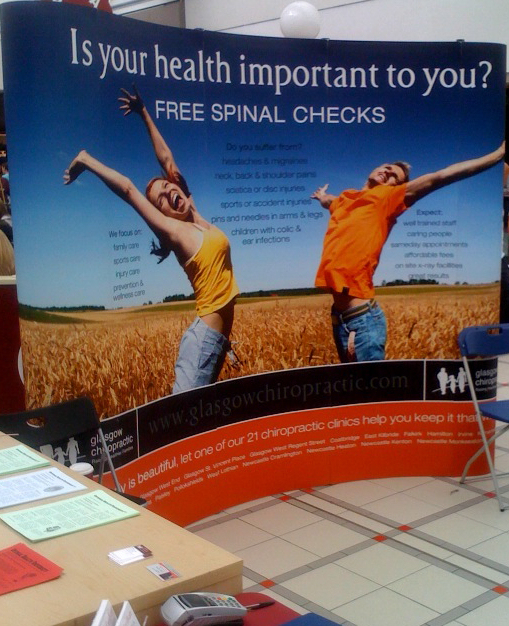 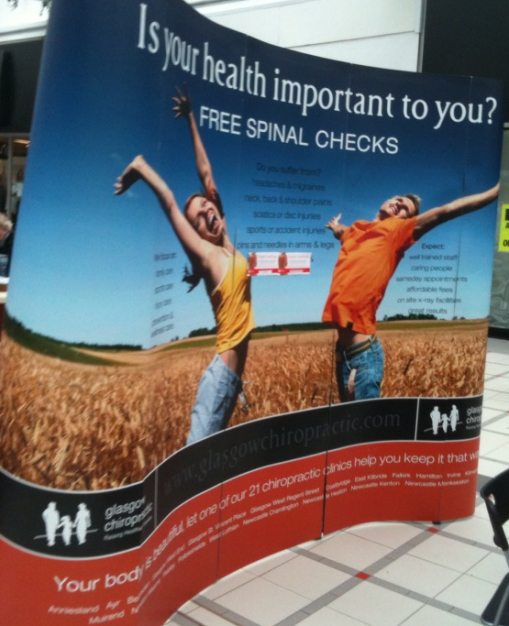 Answer: Today’s advert has the claims for “Children with colic & ear infections” covered up.

If your Polish isn’t up to scratch, this roughly translates as: What can I expect when visiting a chiropractor?

Ah! I hear you say. Is it just a coincidence that this is suspiciously close to What can I expect when I see a chiropractor?

No, of course it isn’t. That was the title of the GCC’s leaflet that Simon Perry (Adventures in Nonsense, Leicester Skeptics in the Pub and skeptical columnist for the Leicester Mercury) complained to the Advertising Standards Authority about last year. END_OF_DOCUMENT_TOKEN_TO_BE_REPLACED