The evidence for David Tredinnick MP

Last month, the following exchange took place in the House of Commons during Health Questions, supposedly about the Government’s revised adult Autism strategy:

David Tredinnick (Bosworth) (Con): Is my right hon. Friend aware that there is clear

A guide for the clueless

When writing Nightingale Collaboration newsletters, I presume readers have some basic science, search, maths and critical thinking skills. I’m sure this covers a good proportion of readers, but there seem to be

Despite calls for them to publish the complete article, its editor, Lynne McTaggart, has not obliged, so I will. END_OF_DOCUMENT_TOKEN_TO_BE_REPLACED

The exposé  by Prof David Colquhoun of the interference by the Department of Health — at the behest of homeopathy promoters — in the publication of impartial, scientifically-based information about homeopathy on the NHS Choices

What does the Swiss Government really think about homeopathy?

By Sven Rudloff and Zeno

A lot has been made by homeopaths about the ‘neutral’ Swiss Government’s report and its unequivocal support of homeopathy. It’s been lauded by the luminaries of the homeopathic world as further proof — as if any was needed, of course — that homeopathic ‘medicines’ are superior in every way to those dangerous and expensive pharmaceutical drugs.

The Swiss government has a long and widely-respected history of neutrality, and therefore, reports from this government on controversial subjects need to be taken more seriously than other reports from countries that are more strongly influenced by present economic and political constituencies.

this report from the Swiss government has confirmed the efficacy and cost-effectiveness of homeopathic treatment. (Source, cached)

The Society of Homeopaths:

A comprehensive and authoritative research study by Swiss scientists has offered an unambiguous endorsement of the evidence base for homeopathy as a clinically effective system of medicine.

Their report, part of a Swiss government evaluation of complementary and alternative medicines, gives a massive boost to the growing body of research underpinning the therapeutic effects of homeopathic medicine. (Source, cached)

The Faculty of Homeopathy and the British Homeopathic Association:

This important report addresses the evidence for the effectiveness of homeopathic therapy in everyday use (i.e. the real world), its safety and its cost-effectiveness.

The authors, Doctor Gudrun Bornhöft and Professor Peter Matthiessen, state: “There is sufficient evidence for the preclinical effectiveness and the clinical efficacy of homeopathy and for its safety and economy compared with conventional treatment.”

Following on from the initial publication of this report, a public referendum in Switzerland in 2009 supported the inclusion of homeopathy and other complementary and alternative medicines in the Swiss national health insurance, with 67% of the people voting in favour. Earlier this month, the Swiss government passed legislation to enact the referendum’s conclusion. (Source, cached and source, cached)

In 2009 a Swiss national referendum voted in favour of complementary medicine being part of the public health service which is now covered by the obligatory public health insurance system. This decision was partly informed by the findings of the 2006 Health Technology Assessment report commissioned by the Swiss Government on the effectiveness, safety and cost-effectiveness of homeopathy in general practice. (Source, cached)

Many other websites have echoed these sentiments, with many taking their lead from Ullman’s article and possibly placing far too much reliance on what he had to say, eg Swiss Government finds homeopathy effective and cost efficient (cached).

You’d think from all this that the ‘neutral’ Swiss Government had taken to homeopathy like the proverbial quacking duck to water.

Of course, to state in this context that the Swiss Government has a ‘widely-respected history of neutrality’ is to conflate political neutrality with scientific objectivity.

As usual, research of truly homeopathic proportions, misrepresentation and cherry picking are the order of the day.

END_OF_DOCUMENT_TOKEN_TO_BE_REPLACED 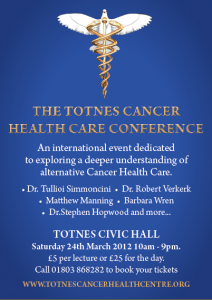 I’m not sure how I came across it, but it was probably on Twitter.

A conference on alternative cancer treatments is being held in Totnes in Devon this coming Saturday, organised by Dr Stephen Hopwood (cached) of the Totnes Cancer Health Centre (TCHC).

END_OF_DOCUMENT_TOKEN_TO_BE_REPLACED

Nutritional therapists are a varied bunch and come in several ‘flavours’, with the science and evidence-based practitioners at one end of the spectrum and at the other, what @skepticstu on Twitter referred to as the ‘Supplement Salesforce’.

At this far end, some seem to think many ills — particularly chronic conditions — are due to dairy intolerance or wheat intolerance, or both or ‘toxins’, or ‘imbalances’, or ‘chemicals’, or deficiencies. And, of course, they have just the personalised detoxification or supplement for you to address the ‘underlying causes’ of your health issues. And they may make extensive use of iridology, hair mineral analysis and applied kinesiology tests to work out your own, optimum health, individualised, holistic, supplement plan. For a price. All major credit cards accepted.

Others, I am sure, give good, evidence-based diet advice without a supplement in sight. They are not the problem here.

END_OF_DOCUMENT_TOKEN_TO_BE_REPLACED 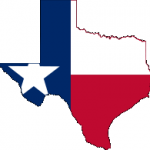 As a last hope for cancer sufferers, his name regularly appears in the media with many a fund-raising appeal launched to enable sufferers to travel to the US to visit his clinic and be treated by the great man himself.

Even a cursory search of the Internet will find many grateful customers of Dr Stanislaw R Burzynski telling how he single-handedly saved their lives, when the NHS or other cancer experts had failed or who could do no more.

If it was your last hope — or the last chance for your child — then who could blame you for wanting to give it a try?

After an uncritical article in The Observer about the heartbreaking tale of a young girl diagnosed with a brain tumour and whose parents were desperate to raise the necessary money to take their daughter to see Dr Burnzynski for treatment, Andy Lewis — quite understandably — felt compelled to write about it: The False Hope of the Burzynski Clinic.

It was not long before Andy received a threatening email from someone claiming to represent the clinic. The tactics this representative used to try to silence Andy and to force him to take his blog post down can be gauged by the title of Andy’s subsequent post: The Burzynski Clinic Threatens My Family. Despicable.

Because there are so many unanswered questions about his treatment, the spotlight of skeptical thinking has been shining brightly on the controversial promoter of his own proprietary, ‘pioneering’ cancer treatments, but the intensity has been turned up all the way to eleven in the aftermath of these and other recent threats.

There has been an avalanche of blog posts in the last few days and it is to be hoped that the name of Burzynski will be appearing high up in search rankings alongside some more skeptical comment that the clinic might be used to or want. The blogger Josephine Jones is trying to keep the list of posts up to date: Stanislaw, Streisand and Spartacus.

Even Cancer Research UK felt they had to speak up: Hope or false hope?

END_OF_DOCUMENT_TOKEN_TO_BE_REPLACED

The end of an era

Professor Edzard Ernst recently announced his retirement as Director of the Complementary Medicine Research Group. What does this mean for him and for the future of critical research into the evidence for alternative therapies?

I interviewed Prof Ernst to find out.

Professor Edzard Ernst is critical of many sorts of complementary therapies. But his views of what works — and what doesn’t — are informed by critical examination of the evidence.

Many of his detractors would have us believe otherwise and see any critical examination of their pet therapy as a biased attack. Nothing could be further from the truth as anyone who understands the scientific process would understand.

END_OF_DOCUMENT_TOKEN_TO_BE_REPLACED

This week is the first anniversary of the report Free Speech is Not for Sale, which highlighted the oppressive nature of English libel law. In short, the law is extremely hostile to writers, while being unreasonably friendly towards