There’s an un-written rule — or at least there should be — that anything said in support of homeopathy cited by a homeopath or supporter should be taken with a large pinch of natrium muriaticum.

That’s not to say homeopaths will always be wrong or there won’t be some grain of truth in what they say, of course, but it will always bear a bit of investigation. There will frequently be more to it than meets the eye.

Out of 81, 5 out of 5 of the clinical trials for hay fever showed a positive result and 8 out of 10 trials looking at mental or emotional problems showed a beneficial effect, while 6 out of 7 trials for infection showed that homeopathy could effectively relieve the problem.

“Based on this evidence we would be ready to accept that homoeopathy can be efficacious, if only the mechanism of action were more plausible” and “the evidence presented in this review would probably be sufficient for establishing homoeopathy as a regular treatment for certain indications……..a conventional method would have been acknowledged with this amount of evidence”, the results are mostly favourable for homeopathy regarding the quality of trials.”

Glowing praise for homeopathy it would seem, but what she fails to mention is the conclusion the authors reached, quoted here in full:

Conclusions At the moment the evidence of clinical trials is positive but not sufficient to draw definitive conclusions because most trials are of low methodological quality and because of the unknown role of publication bias. This indicates that there is a legitimate case for further evaluation of homoeopathy, but only by means of well performed trials.

Spot the difference. Malik does try to link to the paper (but not to an accessible copy of it), but how many will click on her link to check the veracity of what she says? Some other examples of conclusions homeopaths would rather you didn’t read can be found on the Discover Homeopathy website.

Anyway, the point is made: always check original sources to make sure claims made by homeopaths for homeopathy are complete and accurate.

How much do people trust homeopathy? That’s difficult to know unless a survey is done asking that specific question. We could perhaps use the sales of homeopathic products as a proxy, but market surveys are complex things to do and tend to cost a lot on money. Mintel, for example, will sell you their market survey on homeopathic and herbal products in the US for a mere £2,466.89 (Excl.Tax), or their report Complementary Medicines – UK – December 2009 for just £1,750. Well beyond the reach of many, including me.

But the teaser for that last report does tell us:

Growth in the UK’s £213 million complementary medicines market [note: not specifically homeopathy] has gathered pace in the last two years. It is estimated to have grown in value by some 18% between 2007 and 2009 when Mintel last reviewed the industry.

We also know that the market for homeopathic and anthroposophic medicinal products in the EU exceeded €1 billion for third year in a row in 2011. It doesn’t tell us anything about the sales in the UK, but it’s still an interesting figure. Whither the cries of homeopaths that they have no money for decent trials? And we know there is plenty of scope to raise the money for trials if they really, really wanted to.

But homeopaths frequently like to use increasing sales figures in the mistaken belief that this somehow correlates with efficacy. Equally, sales figures are not a measure of trust: they tell only about the success of marketing and PR that they do about whether homeopathy works or whether people trust it.

But fortunately, there are some limited data available that answers that question about trust.

In a recent Tweet, a dedicated homeopathy supporter claimed:

When asked for a source of those figures, she replied:

As I said, Mintel reports cost a lot of money, but I thought it would be interesting to see if I could find the Global TGI Barometer source.

A search shows that the one Global TGI (Target Group Index) Barometer that pops up regularly on homeopaths’ websites is the Global TGI Barometer, January 2008, Issue 33: The lure of alternative medicine. It’s this article that is cited frequently in support of homeopathy, eg:

A survey conducted by Global TGI in 2008 found 15% of the population of Britain trusted homeopathy.

57.  In India, alternative treatments, including homeopathy, are well established and integrated into the healthcare system, with 94 per cent of people saying that they have faith in alternative remedies.[8] [8]  Global TGI Barometer, January 2008; Issue 33.

Homeopathy has never been so popular; currently 15% of the population of Britain trust it.1 Homeopathy is the fastest-growing form of complementary medicine and has experienced a growth of 44% since 2004.1 1. Global TGI Barometer, January 2008; Issue 33.

It is estimated that between 6 and 9 million people in the UK choose to use homeopathy (Source: Global TGI Barometer, issue 33 – Jan 2008).

There are a couple of websites that seem to give most of the text of the article (eg here and here, but the links to the original source are broken), but none looked like the full article, so I asked the publishers, Kantar Media. Although the document is some six years old, they were kind enough to send me the full, original article: The lure of alternative medicine.

This was about a survey of 13 countries, finding out what proportion of people agree with the statement ‘I trust homeopathic medicine’: 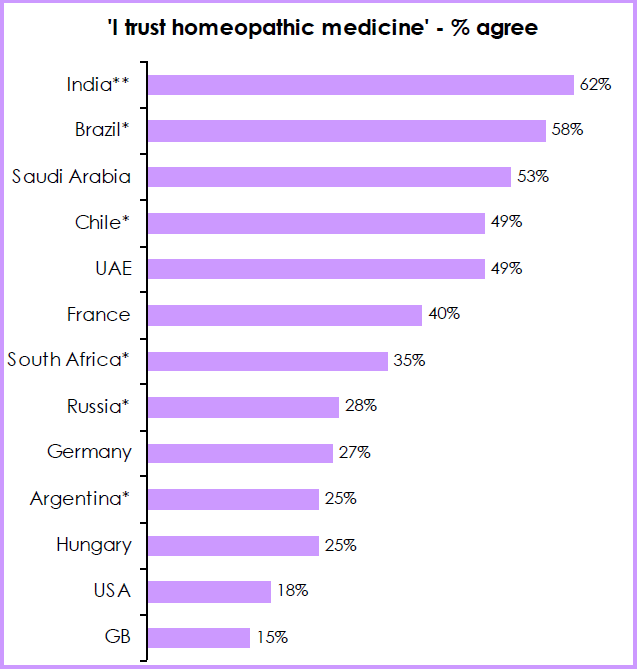 This puts a rather dramatic perspective on the 15% figure for Great Britain.

Additionally, it’s clear that many of the statements made by homeopaths about this article are not supported by what the article actually says! I have to wonder if any of them actually read the article — it is only three-and-a-half pages long — or whether they were just parroting what others had said.

Unfortunately, we can only speculate about the historical, cultural and political reasons for these marked differences, but maybe the reason for the figure for France is more obvious?

But now we know that one of the sources the homeopathy supporter cited did not substantiate the claims she made for the growth in homeopathy. No surprise there. Copying and pasting without engaging brain is an all too familiar gambit of homeopathy supporters — perhaps through ignorance or in the desperate hope that no one will bother to check… More likely, though, it can be attributed to a complete lack of curiosity on their part.

We already know that homeopathy in the NHS has been in steep decline for the last few decades:

This could well indicate that homeopathy isn’t as unthinkingly accepted as it once was.

But the Global TGI Barometer data was from some six years ago — what about trust in homeopathy now? Although Kantar Media haven’t publicly published such a comprehensive survey since 2008, in 2013 they published a Factiod, a single page document Headache Remedies: East vs. West. In it, they were able to say:

TGI data shows that 43% of people in China agree with the statement ‘I trust homeopathic medicine’ compared to just 20% in the USA and 12% in GB.

It would have been good to see up-to-date figures for the other countries, but this does show that trust in homeopathy products in Great Britain has dropped by a fifth,  from 15% in 2008 to just 12% in 2013.

As more people find out what homeopathy is and how homeopathy works, we should not be surprised to see this figure drop even more.