The General Chiropractic Council‘s occasional News from the GCC publication rarely makes interesting reading. It’s usually a mish-mash of stuff only of interest to chiropractors.

But there is an occasional interesting item or two.

The latest issue discusses the apparent ongoing debate between the Advertising Standards Authority (ASA) and the GCC:

The ASA Committee of Advertising Practice (CAP) – the debate goes on

The latest issue we’ve flagged up to the team at CAP relates to claims to treat minor sports injuries.

Its AdviceOnline in respect of osteopathy and physiotherapy states that CAP has accepted that they may claim to help minor sports injuries, but there is no mention of this for chiropractic. In respect of physiotherapy, CAP goes on to state that

“At the present time, CAP is unlikely to ask to see evidence for the treatment of minor conditions.”

We’ve asked CAP to confirm that it would take the same approach to any claims made by chiropractors about minor sports injuries. As ever, we’ll keep the profession in touch with progress.

We have the situation where the GCC  — the statutory regulator for chiropractors, who frequently claim to be a primary health-care profession — is asking the ASA — the voluntary advertising regulator, funded through a levy on advertising spend — to add minor sports injuries back onto their list so their registered chiropractors can make claims about it!

Let’s see if we can help answer the GCC’s query.

A chiropractor advertised in our local free paper at the beginning of last December: 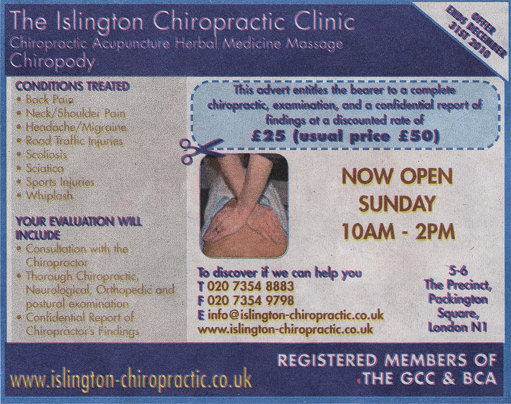 It may be a bit difficult to make out, but the claims are crystal clear:

Among others, sports injuries are mentioned as one of the ‘conditions’ this chiropractor treated. But some of the others are also interesting.

After having considered the Bronfort report last year, the ASA revised their guidance on chiropractic, effective from 1 September 2010. The full guidance is on the ASA’s Copy Advice website as Therapies: Chiropractic (free registration required).

To date, CAP accepts that chiropractors may claim to treat these conditions: (NB: this advice was updated following a review of evidence conducted in September 2010):

Chiropractors may also refer to general aches and pains including those of joints, muscle spasms and cramp

In line with the review of evidence conducted in September 2010, chiropractors are advised to avoid referencing the following conditions unless they hold suitable evidence.

Some of these are interesting, particularly the restrictions (my bold) and I may return to them in a future blog post.

No mention of sports injuries, minor or otherwise.

How does the Islington Chiropractic Clinic claims fit in with this list?

Not much, it would appear.

The ASA were originally going to conduct a formal investigation that would have resulted in an adjudication being published on their website, but the ASA then told me that the advertisers:

…have given us an assurance that they will remove the claims from their advertising and ensure in future that their ads comply with the relevant guidance set out in the CAP Code Advice document ‘Therapies: Chiropractic’.

…and they closed the case. All that appeared on the ASA’s website was a mention for the advertiser under Informally Resolved Cases on 16 February this year.

It’s good to get the assurance that they would abide by the ASA guidance in future. 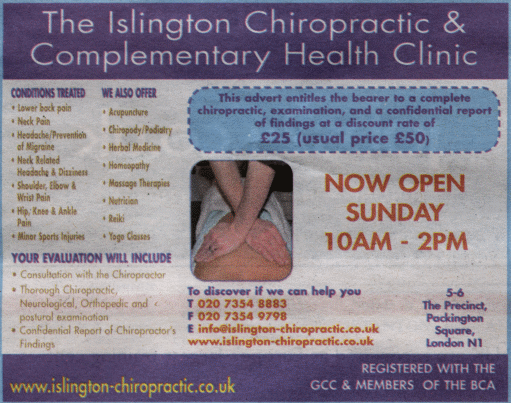 This has the following:

This might be closer to the ASA’s guidance, but it’s not quite there yet.

I complained again, noting the conditions not listed in the ASA’s guidance.

The ASA told me:

…with a view to acting quickly, we have instructed Islington Chiropractic Clinic to change the ad. We have asked them to remove from their ads, any claims relating to migraines, dizziness, wrist pain, ankle pain & minor sports injuries.

The advertiser’s name appeared a second time on the ASA’s website on 23 March as another Informally Resolved Case.

And the answer is…

Way back at the Investigating Committee (IC) stage of my complaints, the GCC’s IC stated many times:

The Investigating Committee noted the reference to: disc problems; shoulder, arm, wrist and hand problems; sports injuries; and leg, knee, ankle and foot problems. It concluded that such terms are broad in nature and the [web] pages provided do not enable the Committee to understand what is covered by the use of these terms. The Committee accepted that due to the generic nature of the terms, it is unlikely that randomised controlled trials will have been conducted that address them.

Note the mention of ‘sports injuries’.

Even though the IC couldn’t understand what it meant, they still thought it unlikely there was any robust evidence for treatment by chiropractors.

However, including ‘sports injuries’ in an advert is a clear claim to be able to treat, well, ‘sports injuries’ and if it’s too broad a term for even their statutory regulator to understand what is meant, then perhaps chiropractors shouldn’t be claiming they can treat sports injuries with chiropractic (cached)?

When they asked the ASA, I hope the GCC was able to tell them exactly what they meant by ‘minor sports injuries — they certainly didn’t know last year when they were dealing with my complaints.

But perhaps we already know the ASA’s answer.

35 thoughts on “Taking the strain”