The beginning of the end? Part two

Last time, I said I’d have more to say on the letters I’ve received so far.

I said that seven of the 36 were dismissed because the chiropractors mentioned on the websites were no longer at that clinic and therefore — by the GCC’s reckoning anyway — were no longer responsible for claims made. My arithmetic was faulty; there were eight, leaving 35 others. I’ve corrected the previous blog post.

This post deals with why the Investigating Committee (IC) decided there was no case to answer in most of these 35.

The vast majority of the 35 had made claims about sciatica — it was claimed on 31% of the sites I included in my complaint. (There will be more on sciatica in a future blog post.)

The Investigating Committee noted from the [Bronfort] report that there is no high or moderate positive evidence from randomised controlled trials that would support an advertised claim regarding sciatica using manual therapy.

Nothing unexpected there. But the attentive reader will know by now that it may not always be that simple:

In the light of this, the Investigating Committee concluded that it could be inappropriate for you to make such an advertised claim.

It ‘could be inappropriate’ to make a claim not supported by good evidence??? When might it be appropriate???

However, having found evidence that the chiropractor had indeed made the claims I was complaining about and having decided that there was no robust evidence to substantiate that claim and that it could be ‘inappropriate’ for them to make such a claim, did they decide there was a case to answer?

In these circumstances, and having taken all the information before it into consideration, the Investigating Committee has concluded that the facts of this complaint, taken at their highest, would not be capable of amounting to unacceptable professional conduct and therefore there is no case to answer.

In this Act conduct which falls short of the standard required of a registered chiropractor is referred to as “unacceptable professional conduct”.

So a chiropractor, making a claim for which there is no evidence is not considered to be unacceptable professional conduct and therefore has no case to answer. Such conduct does not fall short of the required standard, apparently.

This does not bode well.

When is a list of conditions not a claim to treat those conditions?

Taking one of them as an example, a chiropractor had stated on his website (cached) — and in fact, still makes exactly the same claims:

They are clearly making a claim that chiropractic treats sciatica (I’ll come to the other claims later) — and the GCC agrees.

But many websites never actually used the word ‘treat’ or ‘cure’ or anything similar. Many just had a list of conditions.

Like this clinic in Leicester. This website has been completely demolished and no longer exists, access in archive.org has been blocked, and the domain registration has just expired, but this is one of the pages I submitted to the GCC: 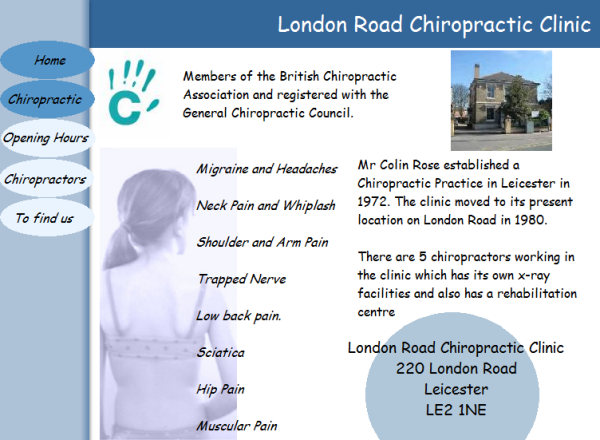 A list of medical conditions, but no help/treat/cure/ease/alleviate symptoms or other woolly weasel words. What message is the reader intended to take from that list?

If these chiropractors aren’t claiming they can in some way influence those particular conditions, what’s the list for? Is it a list of the conditions the chiropractors themselves suffer from, perchance?

Anyway, how did the IC deal with this one?

…however it was not clear from the website extract provided whether you made a publicised claim to treat sciatica on your website.

I have little doubt that the ASA would consider such a list of conditions as a claim to treat those conditions. As I’ve pointed out before, the ASA cover implied claims as well as direct ones (clause 3.1 of the CAP Code). But then again, the IC don’t seem to be at all interested in what the ASA have to say on anything, despite the CoP mandating that chiropractors follow their guidance.

Well, if the IC weren’t clear about something, it might be an idea to ask the chiropractor concerned what he/she meant.

It did cross their minds:

The Committee considered whether it should ask you to provide further information about these references as they appeared on your website,

Yes, it all happened a long time ago…

The Committee concluded that there is insufficient evidence available to it for it to consider this matter further.

Because it all happened a long time ago, they gave up.

Anyone spot the non sequitur: “The IC considered whether it should ask about the references as they appeared on the website, but decided not to because the current site might not be the same”?

Is that really the best excuse they can come up with?

I’m open to suggestions as to why the IC made this bizarre decision, but I note the chiropractors at this particular clinic include Tim Hutchful and Colin Rose, Secretary and Director respectively of the BCA.

I also note that five of the eight chiropractors on the IC are members of the BCA.

A case to answer?

There are some legal issues to be considered around this, but, for now, I’ll simply state what the Chiropractors Act 1999 has to say about the duty of the IC at this stage. It states that the IC shall:

…consider, in the light of the information which it has been able to obtain and any observations duly made to it by the registered chiropractor concerned, whether in its opinion there is a case to answer.

Have they applied these rules in this case? The phrase ‘information which it has been able to obtain’ does imply that they have to actively do something, but have they tried hard enough to gather information? We already know they rejected my comment document, although they said

Whether or not they have, the rules say nothing about not bothering to ask for information just on the off chance it might be a bit out of date.

But what about the other conditions?

In the first example I used above, the website made claims about many other conditions. To recap:

Surely these are conditions that Bronfort either didn’t find any evidence for or found there was no good evidence for?

Again, it’s not so simple.

The IC noted references to these conditions (although, bizarrely, a slightly different list):

The Investigating Committee noted the reference to trapped nerves, sports injuries, trauma injuries, leg and arm pain, stiff joints and wear/tear, repetitive strain injuries, muscle de-conditioning problems, neck sprain injuries and muscle tension problems. It concluded that such terms are broad in nature and the pages provided do not enable the Committee to understand what is covered by the use of these terms.

So they have refused to consider these because they couldn’t understand what the chiropractor meant by them. However, they went on to repeat the nonsense about not bothering to ask the chiropractor for further information…

Because these ‘broad’ terms were not mentioned specifically by Bronfort, doesn’t that mean that there is no good evidence for them and therefore — by the GCC’s own argument — should not be being claimed by chiropractors? In their guidance on advertising, they say:

…any claims you make must be based on best research of the highest standard.

As I mentioned in Part one, the IC did not, in the letters, refer to the ASA guidance their chiropractors are supposed to adhere to, and provided no explanation for this omission.

Given that guidance and their past adjudications, I am convinced that, had the IC followed ASA guidance, they could not possibly have come to these bizarre conclusions.

Robust guidance, properly and diligently applied is what is needed to properly protect the public, not the feeble excuse that “it wasn’t really a claim to treat, but anyway, we don’t really know what they meant therefore we give up”.

Did they even consider all the evidence?

The Committee carefully considered the complaint made by Mr Henness and all of the documentary evidence provided to it, as set out in Appendix 1.

What about the evidence I provided to the GCC? Have they considered that — particularly what I said about the proper application of ASA guidance? Despite promises, I strongly doubt it.

Much more to come

But don’t worry, there is more to come. Much more.

I’ve still to be told about the other 500-odd cases. Even the best whitewash might not be white enough.

Going by the 72% of Simon Perry’s complaints that have so far been passed on to the PCC, I don’t think any chiropractor should be too heartened by this first round — a round that is by no means over.

94 thoughts on “The beginning of the end? Part two”