The respectable face of homeopathy?

The dichotomy must tear some homeopaths apart. They eschew conventional medicine — particularly the link to the ruthless and profit-mongering Big Pharma with all their toxic concoctions — yet they crave the respectability, fame and fortune of mainstream medicine. And in their quest, they seem to have no scruples and even mimic their enemies.

But then there’s the problem of homeopathy not being amenable to randomised controlled trials (apparently), yet they keep citing ‘trials’ published in their own comics. That might fool the layman into thinking there is a good evidence base for the efficacy of their sugar potions, but it fools no one who has even a jot of knowledge of science.

However, the are many members of the public who are not so aware of these tactics and not sufficiently versed in the methods of science. These are the ones available to be conned by the snake oil salesmen. To try to prevent them being taken advantage of, we do have some laws and regulations. These sometimes work, but not always. The Advertising Standards Authority are particularly good at weeding out the nonsense from adverts for homeopathy. They, however, have few teeth.

Trading Standards are the guardians of Consumer Protection law, but they are fragmented and seem to be too busy chasing counterfeiters to bother with trivial things like health.

We also have the Medicines and Healthcare products Regulatory Agency:

…the government agency which is responsible for ensuring that medicines and medical devices work, and are acceptably safe.

Work?! Since they have been given the responsibility to implement the EU Directive covering homeopathic potions, they have already failed! Andy at The Quackometer and Martin at Layscience have both blogged about the bizarre decisions of the MHRA about homeopathy:

The MHRA and the Labeling of Homeopathic Products

But what is the public perception of homeopathic potions?

The scientist on the high street

In a Boots store, the ‘Alternative Medicines‘ are fitted snugly between the Fybogel and the Pharmacy counter; between the cold remedies and the Canestan. Doesn’t this mislead the customer into thinking they are proper medicines?

Then there’s the name:

medicine noun 1 a any substance used to treat or prevent disease or illness, especially one taken internally; b as adj • medicine bottle • medicine cabinet. 2 the science or practice of treating or preventing illness, especially using prepared substances rather than surgery. 3 medical practice or the profession of a physician. 4 in primitive societies: something regarded as magical or curative.

Do homeopathic potions treat or prevent disease or illness? Well, an emphatic NO.

But most people, I believe, would expect a medicine to be able to have some kind of positive and noticeable effect on their medical condition. That rules out homeopathy as a medicine. To describe homeopathic potions as medicines is therefore downright misleading.

In fact, the ASA:

…understands that no scientific rationale exists for assuming that remedies lacking in pharmacologically active molecules can produce clinical effects and is unaware of robust evidence that proves it does.

Well put. So why are Boots still selling these sugar pills? That is probably obvious.

The array of homeopathic potions on sale in Boots is frequently impressive, all laid out in neat rows on racks with military precision. 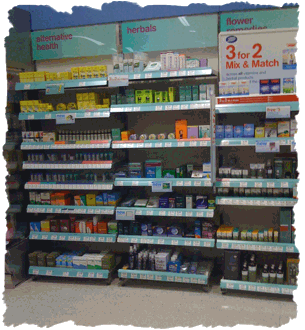 But they are only a tiny fraction of what is available: Nelsons have around 1,000 homeopathic potions available on their website. Then they have their ‘Made to Order’ range of 759 substances available in a range of ‘potencies’ from a measly 6C (10¹²) to a mindbogglingly potent MM — it is left as an exercise for the reader to work out just how many Universes of water you need to find just one molecule of the original substance being diluted.

We’re told it is:

Who on earth allowed them to make such a misleading claim? The MHRA labelling rules for homeopathic potions are given in Note on labelling requirements for homoeopathic products. They have a lot to answer for.

What’s in a name?

Even the name is determined to build up the overall impression these are real medicines: arsen. alb. A few abbreviations and some words of Latin never fails to make something sound more authoritative that it really is. It’s full name is Arsenicum album and is simply an oxide of arsenic, Arsenic Trioxide, As2O3. It is poisonous, but does have some proper medical uses — in non-homeopathic dilutions, of course. However, relying on the magical water to remember, homeopaths believe it is a very useful potion:

A profoundly acting remedy on every organ and tissue. Its clear-cut characteristic symptoms and correspondence to many severe types of disease make its homeopathic employment constant and certain. Its general symptoms often alone lead to its successful application.

Arsenicum Album. should be thought of in ailments from alcoholism, Ptomaine poisoning, stings, dissecting wounds, chewing tobacco; ill effects from decayed food or animal matter; odor of discharges is PUTRID; in complaints that return annually. Anaemia and chlorosis. Degenerative changes. Gradual loss of weight from impaired nutrition. Reduces the refractive index of blood serum (also China and Ferr. Phos.). Maintains the system under the stress of malignancy regardless of location. Malarial cachexia. Septic infections and low vitality.

Just in case you think these are the ramblings of some rogue homeopath, the same deluded nonsense can be found elsewhere. (OK, that last link was to Vithoulkas’ website, but you get the idea.)

Homeopaths would like to claim that there is evidence for homeopathic ars. alb. and frequently cite a 2007 trial involving humans wheat seedlings. However, this was fisked by Professor David Colquhoun in his blog post: Homeopaths show Arsenic 45x is indistinguishable from water.

However, Boots are not so stupid as to make such dangerous and unsubstantiated claims.

What they should be saying to properly inform the public is: “there is no chance of even a molecule of the supposed main ingredient in any pill”. If Boots or any homeopaths are proud that their potions have been diluted out of existence, why can’t they clearly state that?

Sucrose and lactose? Just sugar, nothing else (although the purity might be interesting to know). What’s this pillules thing? They are just pills and using this sciency sounding word is simply — yet again — misleading.

It then goes on to tell you how to open their precious medicine.

Unscrew cap and without touching the pillules tip them into the mouth.

Do they really think some of the magic will be rubbed off if you touch them? This is all just part of the façade of making the sugar pills sound sciency, medical and respectable. It is misleading.

Dosage: Adults and children 2 pillules every two hours for teh first six dosws, thereafter take dose four times a day for up to five days or until symptoms improve. If symptoms worsen or persist consult a doctor. Suck or chew pillules and take in between meals.

The dose is utterly irrelevant. It doesn’t matter if you take one or all 84 in one swallow — it will have no effect on any medical condition.

Well, actually, that’s not true. Where the science leads and all that… I have to announce that I have discovered that there is one medical condition where this homeopathic potion could save lives: hypoglycaemia. The pills are about 3.4 mm in diameter (making them look more potent), giving about 0.14 g of sucrose/lactose in each. A bottle of 84 is just under a third on an ounce. About the same sugar as you get in a ‘Fun Size’ pack of nine Malteesers. Pure glucose would be better, but if you’ve nothing better at hand, it’ll do.

What is even more bizarre it that some homeopaths claim that it matters not how many pills you take at one go, it is still just one dose! Apparently, it’s the frequency of taking the dose that counts. Invent some complicated rules and you’ll further enhance the mystery (and the placebo effect), but all you’re doing is misleading the public.

Just remember, it’s the glass that is dangerous, not the sugar!

KEEP OUT OF THE REACH AND SIGHT OF CHILDREN.

WTF does ‘without approved therapeutic indications’ mean? Perhaps there are some unapproved therapeutic indications? It is certainly sciency sounding. But it is a misleading phrase that was agreed with the MHRA and the homeopathic industry: it says that there are no medical conditions that would indicate that these pills would be effective. But why doesn’t it say that in plain English? Perhaps:

A sugar pill for which there is no medical evidence that it will have any effect on any condition whatsoever.

Where on earth did the MHRA phrase come from? Did they check to see in the average punter actually understood the message this was trying to convey? I doubt it. It is yet something else designed to mislead the public.

That’s how Boots make homeopathy look respectable: make it look like a real medicine; make it sound powerful, yet fragile, perhaps even dangerous; give it an air of science; mimic your ‘competitors’. Build up the illusion and your customers will be unaware of the real reason they get better.

The purveyors of the nonsense that is homeopathy are misleading the public into thinking it is medicine. It’s not. It is quackery.

Do they really think some of the magic will be rubbed off if you touch them?

16 thoughts on “The respectable face of homeopathy?”