A bit of divination can be fun!

OfQuack (aka the Complementary and Natural Healthcare Council) was set up with the help of £900,000 of public money to try to give all sorts of AltMed quackery some kind of credence and legitimacy. It is backed by Prince Charles’s Foundation for Integrated Health and considering their other bastard child, Dodgy Originals, has just had to be bailed out the runes may not be falling in OfQuack’s favour!

Their failures have been highlighted by Le Canard Noir and the Lay Scientist in various blog posts. In Martin’s last post, he highlighted the problems with OfQuack’s last set of Board minutes and the pitiful numbers of quacks who have signed up since they opened shop in February.

I have been recording their membership numbers since they started, and, as a public service, I’ve created a suitable widget that can be added to websites, blogs, etc to highlight just how few members they have been able to persuade to join and how far off target they really are: 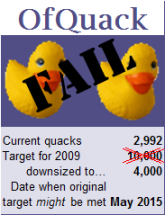 (Note that the above graphic will change as I update it, so it will always show the latest numbers.)

To insert it into your own website or blog and link back to this post, you can use the following HTML code*:

Feel free to amend to suit your needs. I will update it as the numbers change.

* If you have problems with the HTML, try re-typing all the double quote marks — they sometimes get converted to opening and closing quote marks, which don’t work.

Le Canard Noir has highlighted the way OfQuack re-wrote their press release, downsizing their estimate of numbers of members they were aiming for by the end of 2009. This started out at an ambitious 10,000, but was recently downsized to just 4,000. Even that looks a tad optimistic!

If they continue at their current rate, by the end of this year, they will have amassed just 986 followers, not even 10% of their initial target.

Here’s some pretty charts to show where they are (click the chart to enlarge).

This chart shows how many have each discipline as their first discipline:

This one shows how their numbers have increased since they opened and how the projected year-end number has varied:

Will OfQuack meet their target of 10,000 4,000 by the end of the year? With current figures and past history, it would look like they’ll barely reach 1,000. The future does not bode well for this self-styled quack regulator.

Perhaps all is not lost, however. According to their buddies at the FIH, they hope to recruit cranial sacral practitioners, naturopaths, bowen practitioners, reiki practitioners and Alexander technique teachers by the end of this year.

Then again, 2010 may be a bumper year for them — assuming they’re still in business. They plan to bring micro-systems acupuncturists, hypnotherapists and professional healers into the regualtory fold. Thank goodness they aren’t letting the amateur healers in…

7 thoughts on “Casting the runes”