Is it really to do with the BCA’s reputation?

In his recent Story so far, Simon Singh said:

Initially The Guardian newspaper tried its best to settle the matter out of court by making what seemed to be a very generous offer. There was an opportunity for the BCA to write a 500 word response to my article to be published in The Guardian, allowing the BCA to present its evidence. There was also the offer of a clarification in the “Corrections and Clarifications” column, which would have pointed out: “The British Chiropractic have told us they have substantial evidence supporting the claim they make on their website that their members can help treat children with colic, sleeping and feeding problems, frequent ear infections, asthma and prolonged crying. (Beware the spinal trap, page 26, April 19).”

Unfortunately, the BCA rejected these offers and moreover made it absolutely clear that it was not suing The Guardian, but rather it was suing me personally. At this point The Guardian newspaper chose to step back.

I find this all very odd. The BCA said that what Simon had said was:

The Guardian offered the BCA space for a 500-word reply. The BCA refused.

The Guardian offered them a clarification. The BCA refused.

Who read this (alleged) defamation? It was the readers of the print and online version of The Guardian — who else knew of it? That’s where Simon’s opinion piece was published and it can only be those readers who have been influenced by what it said, whether defamatory or otherwise.

Remember that the BCA were concerned that the article was:

What better way to right a wrong and inform those very same readers that Simon had got it all wrong and there is, indeed, many jots of evidence for the efficacy of chiropractic for things like infantile colic and asthma and that it was Simon who was bogus? Surely the wrong would have been righted; their damaged reputation repaired, they could happily continue on their way promoting what they promote?

Instead, they chose to pursue Simon Singh.

Now, what has that done to their reputation? The case has gone world-wide, with articles in newspapers as far away as Colombia as well as the prestigious Wall Street Journal, Nature, the Economist and even the Daily Mail, surely a fertile ground for new (and existing) chiropractic customers?

Enter “Simon Singh” “British Chiropractic Association” into Google and you currently get 6,500 hits. A spectacular PR ‘win’, isn’t it? Particularly for an organisation very concerned that Simon’s article was:

So, why did they pursue Simon and not quit while they were winning with a Guardian apology and the opportunity to put the record straight?

I can think of just one reason: 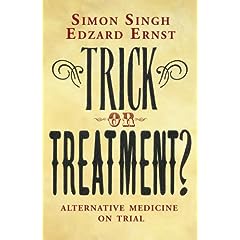 7 thoughts on “Is it really to do with the BCA’s reputation?”