Prof Ernst has covered the details of the Judicial Review brought by homeopathy user Honor Watt against NHS Lothian after their decision to withdraw funding for homeopathy referrals to the Glasgow Homeopathic Hospital: Homeopathy: another day in court + another defeat.

The judgement, published yesterday, names the three products she was prescribed and calls them ‘homeopathic medicines’: Agaricus and Rockrose for anxiety and Bovista for arthritis.

Ignoring the fact that many homeopaths would baulk at the notion of prescribing a homeopathic potion for a particular medical condition rather than treating her ‘holistically’, it’s interesting to look at these in a bit more detail.

We know that the Glasgow Homeopathic Hospital buys most or all of its supplies of homeopathy products from Freemans Homeopathic Pharmacy in the village of Busby, just south of Glasgow.

Agaricus and Bovista (puffball) are both genuses of mushroom and Freemans list four different Agaricus products: Agaricus Bulb, Agaricus Emet, Agaricus Muscarius and Agaricus Stercorarius, and one Bovista product: Bovista (Lycoperdon Gigan). It could well be these that Watt was prescribed.

RockRose isn’t listed as a homeopathic product, but Rock Rose is one of the 38 Bach Flower products and Freemans do sell these — genuine Bach Centre products, apparently — so it could be this she was prescribed for her anxiety.

The rescue remedy. The remedy of emergency for cases where there even appears no hope. In accident or sudden illness, or when the patient is very frightened or terrified or if the condition is serious enough to cause great fear to those around. If the patient is not conscious the lips may be moistened with the remedy.

Another one of the 38 Bach flower food products

Bach Flower products are not homeopathic, of course: they are very dilute herbal products, usually diluted to around 1 part in 100,000 using brandy and grape alcohol. And there is not a jot of good evidence to support any notion that it can do what Bach supposed it could.

But then, Bach Flower Remedies are foods, not medicines and have been that way since the medicines regulator, the MHRA, cancelled the Product Licences of Right (which they had held for the past 40-odd years) in January 2014. Because of this, they are now classified as foods and have to abide by the rules laid down by the EU Register of authorised health and nutrition claims. In the UK, advertising claims for food supplements fall within the remit of the Advertising Standards Authority. The rules do allow some health claims to be made, but only ones authorised as shown in the register. However, because Bach products are mostly alcohol, the rules rightly prohibit any health claims.

The Bach Centre sells Rock Rose in the usual 10 ml bottle for £5.99 to the general public. I wonder how much NHS Lothian were paying?

Only by the label

We also know that, once in their bottles, it’s a bit difficult to tell which is which. Giving evidence to the House of Lords Science and Technology Committee in 2007, Kate Chatfield. representing the Society of Homeopaths and a senior lecturer in homeopathy at the University of Central Lancashire was asked:

Lord Broers: I have a simple, technical question about homeopathy and drugs. Is it possible to distinguish between homeopathic drugs after they have been diluted? Is there any means of distinguishing one from the other?

Ms Chatfield: Only by the label.

Prof Ernst was also present, but Hansard doesn’t record whether he chuckled at that admission.

John Cook of North West Friends of Homeopathy and director of the British Homeopathic Association (BHA) gets a mention in the judgement as having been specially invited by Lothian Health Board during their consultation and the judgement mentions that the Board’s submission says:

The real force behind the petition [to the Court of Session] was a charity, not the petitioner. [Honor Watt]

The Judge says no more about this — presumably because it was irrelevant to the case as presented — but the BHA is mentioned in relation to its position on the evidence for homeopathy.

We know the BHA — and John Cook in particular — are staunch defenders of homeopathy and they are one of only of several homeopathy charities, but it does seem a fair assumption that it was the BHA that was behind this — they are a charity, after all. Perhaps they were funding it as well. It could have been another homeopathy charity, Homeopathy: Medicine for the 21st Century [sic]. Who knows? If you do, please let me know.

I was checking the documents of the BHA that are filed at Companies House and noticed that two documents were filed on 20 August:

The BHA’s website still shows Treuherz (who also runs the website Homeopathy Helpline [sic]) as a trustee, but not Cook. Cook is shown as a Trustee in archive.org’s cache of that page on 16 March 2015.

It could be Cook was due to stand down (he was 68 in April) anyway… but is it a coincidence these documents were filed just seven days before the judgement was handed down? 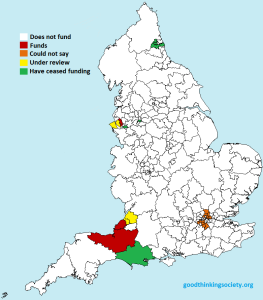 The (further) decline of homeopathy on the NHS

And what better excuse is needed to again highlight this, showing the decline in the number of NHS homeopathy prescriptions fulfilled in community pharmacies in England: a drop of 94% in the past 17 years.