…and in with the new

In a process that took a while (as these things do), that CoP was re-written after a consultation and a new Code of Practice came into force on 30 June 2010.

The GCC sent out their consultation on this document in September 2008, some nine months before my complaints.

Although many of the words were the same, the new version was structured differently. In previous versions, it was clear everything in the document had to be complied with (even if that has not been entirely clear to some), but the 2010 version was split into columns, with the left column headed ‘Standards’ and the right, ‘Guidance’. The new version explains:

Achieving the requirements set out in the Code of Practice and the Standard of Proficiency will deliver a standard of chiropractic care that will promote patient health and wellbeing, and protect patients from harm. These requirements are laid out in the left-hand column in the following pages.

The right-hand column gives guidance and advice to help chiropractors meet these requirements and provides links to further information, including details on where the content of further legislation can be found. The guidance is not exhaustive.

Chiropractors must keep to all the standards within the Code of Practice and the Standard of Proficiency, including complying with all related legislation.

There is no further information given as to whether compliance with the ‘guidance and advice’ of the right-hand column is mandatory or whether a chiropractor can choose to completely ignore it.

The relevant clause in the June 2010 CoP is now clause C4, which says:

So, the requirement to follow the law and ASA guidance has been relegated to ‘Guidance’ instead of ‘Standards’ and it would appear that chiropractors can ignore that ‘Guidance’ and the pesky ASA guidance.

…and in with the new new

But it looks as if even this was too much for chiropractors.

Yet another new version of the CoP appeared on the GCC’s website on 22 December 2010.

It’s difficult to tell that it’s different because it’s got the same title, same file name (COPSOP_2010.pdf) same implementation date in bold letters on the front cover and exactly the same ISBN number. No hint that anything had changed. Just what you’d want to do if you didn’t really want anyone to notice what you were up to. But the metadata in the pdf shows it was modified on 20 December. 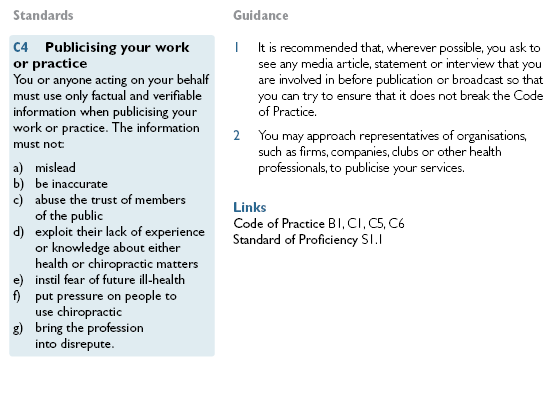 The words that have magically disappeared from the ‘Guidance’ are:

You can advertise your practice, and allow someone else to do so, as long as you follow the law and guidance issued by the Advertising Standards Authority.

So now chiropractors don’t even have the ASA’s guidance to help them when they try to decide what they can and can’t advertise.

I wonder what forced them to change their minds (again) and delete the guidance?

Just as well there is other GCC guidance to help them decide what they can and can’t claim in any advertising, including websites:

In March 2010, the GCC published their Advertising guidance for chiropractors (pdf) (cached):

You are urged in the strongest terms to use the report and its evidence summary tables to review the content of your printed advertisements, practice leaflets and any website that publicises your practice, to ensure compliance with section C4 of the GCC’s Code of Practice and Standard of Proficiency: effective from 30 June 2010, the relevant law and guidance issued by the Committee of Advertising Practice (CAP) – the sister organisation of the Advertising Standards Authority.

This is reiterated on the webpage Advertising guidance for chiropractors (cached):

You are urged in the strongest terms to use the report and the tables to review the content of your printed advertisements, practice leaflets and any website that publicises your practice, to ensure compliance with section C1.6 [sic] of the GCC’s Code of Practice, the relevant law and guidance issued by the Committee of Advertising Practice (CAP) – the sister organisation of the Advertising Standards Authority.

So although no longer mentioned in the CoP, ignoring ASA guidance doesn’t look like the sensible option.

A few months ago, the ASA changed their guidance on what advertising claims they would allow for chiropractic. This will be the subject of my next blog post, but the new ASA guidance can be found here (free registration required).

But just in case anyone thinks that the job is done and that no chiropractor would now openly advertise claims about conditions not supported by robust evidence should have a look at the results returned by even simple web searches for colic, ADHD, asthma, cerebral palsy, bedwetting and ear infections.

It looks like there is more that needs to be done if the public are to be protected from misleading claims.

Fortunately, it all changed on 1st March…

The main change in this new version is the clarification of the difference between the standards in the Code of Practice and the Standard of Proficiency, and the guidance and information to help chiropractors deliver those standards. To assist in this, a new layout is being tested – this sets the standards which chiropractors must meet in the left-hand column of the page and guidance, information and links to further documents in the right-hand column.

In addition the document has been updated to reflect any changes in legislation and guidance, and to capture more effectively the different settings in which chiropractors may work. An index has also been introduced to help chiropractors and others find their way around the different sections.