In Casting the runes, I highlighted the abject failure of OfQuack to reach even their ever-so-slightly modified 2009 membership target. Remember, it started out at 10,000. Then it was downsized to 4,000 — just five months after they opened for business — by re-writing their press release from the previous December. Then, in September, The Lay Scientist announced that their July Committee meeting minutes said they were planning a celebration in the Autumn when their membership was expected to reach the dizzy heights of just 2,000.

Well, now it’s the last day of 2009, how have they fared? For those following the OfQuack Fail widget, it’ll come as no surprise to find that they have failed — spectacularly. 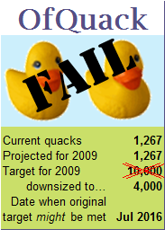 They have registrants in just five ‘disciplines’ (as they call them):

Now, the more observant among you will have noticed that this total isn’t the same as the 1,267 I mentioned earlier. This is because some quacks have signed up to more than one discipline; the table of figures give the numbers signed up for each discipline. For example, there are 750 massage therapists who put that down as their first discipline and a further 9 others for whom massage isn’t the first one they registered with. They have 128 registrants who are registered in two disciplines, 36 in three disciplines and just one in four disciplines.

No party yet then.

But you never know — their fortunes may change in 2010. They will start accepting the next six disciplines any day now…

However, if we extrapolate the current figures, it will be another seven months before they crack open the bubbly; another two years to breach the 4,000 barrier; and The Quackometer‘s new duckling will be well into Primary school before they get to their original 10,000 break-even target. Can they last that long?

Not everything’s been doom and gloom in the world of regulating nonsense.

As I said previously, OfQuack at least appear to have handled Simon Perry’s 15 complaints professionally (other than their insistence that the fitness to practice of the complainees had not been affected by making false and misleading claims). They have stated that they will require all registrants stick to their Code of Conduct, Performance & Ethics and stop misleading the public with false promises. That’s what a good and effective regulator is supposed to do, isn’t it? Let’s hope other regulators (voluntary or otherwise) take a lead from them so the public is protected from misleading claims.

But the real question for OfQuack for 2010 is whether can they make any progress at all in 2010? What quack would want to join an organisation that prevents them making claims they have been making unchallenged for years? Do the (supposed) benefits of membership of OfQuack outweigh all those restrictions?

Perhaps if they added astrology and tea leaf reading to their list of disciplines, they’d have someone who could tell them if they even have a future, but I think we’ll just have to wait and see.

But it doesn’t take a psychic to see that 2010 is going to be an interesting year for quackery and its regulation.

2 thoughts on “Casting the runes II”