I get anonymous chiropractic mail, I do!

A few weeks ago, I was sent a copy of  the 12 August edition of the Southend Echo, which carried an advert for a chiropractic clinic in Westcliff-on-Sea, Essex. The paper was folded to expose this advert for the Cliffs Chiropractic Clinic Ltd: 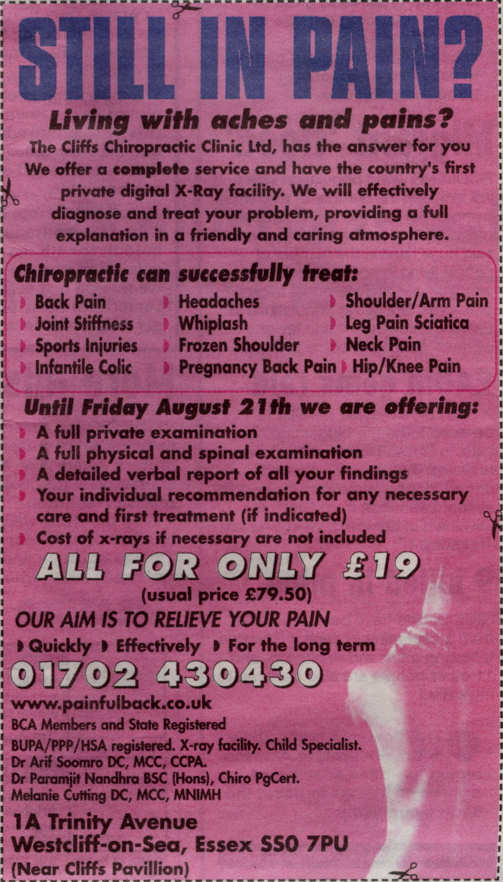 What was strange about this was that it was sent to me anonymously. Through the post. To my home address.

Questions have to be asked: who sent it, why and how did they know my home address?

Since a relative, friend or fellow sceptic would have at least mentioned it in passing, I can only assume it came from someone who got my address from the General Chiropractic Council when they sent out letters to all the chiropractors I had complained about.

We already know that the chiropractic ‘profession’ is riven with disputes between the various ideological factions. These particular advertisers are all British Chiropractic Association members. We also know that many chiropractors consider the BCA’s libel against Dr Simon Singh to be A VERY BAD MOVE.

So perhaps someone from a different faction wanted to create trouble? Maybe there is a chiropractor out there who now understands why scientists think it is woo. Or perhaps someone working for a chiropractor has a conscience that is now bothering them? Perhaps it’s a simple attempt to disrupt the business of a competitor? We’ll probably never know (unless the person wants to identify him/herself?).

Just look at the claims being made:

One stands out in particular: infantile colic.

I complained to the ASA.

When the ASA contacted the chiropractors concerned, they said they would not use the advert again without removing the offending claims and getting it vetted by the ASA’s free Copy Advice team.

But you have to wonder, in the light of the intense focus and scrutiny there has been on chiropractic claims in the last six months, why any chiropractor would bother to try to make claims so obviously out of kilter with the ASA’s acceptance criteria. Did they think no one was watching?

Is there any scientific evidence for, say infantile colic? That’s one of the claims that they will have to remove from any future advert (as well as whiplash, headaches, etc — I’ve already detailed what the ASA will and will not accept).

The BCA’s plethora has already been totally demolished, but the International Journal of Clinical Practice published a paper by Prof Edzard Ernst in their September 2009 issue: Chiropractic spinal manipulation for infant colic: a systematic review of randomised clinical trials (pdf).

Some chiropractors claim that spinal manipulation is an effective treatment for infant colic. This systematic review was aimed at evaluating the evidence for this claim. Four databases were searched and three randomised clinical trials met all the inclusion criteria. The totality of this evidence fails to demonstrate the effectiveness of this treatment. It is concluded that the above claim is not based on convincing data from rigorous clinical trials.

In conclusion, the current evidence from RCTs does not show that chiropractic spinal manipulation is an effective treatment for infant colic.

Nope. Not a jot. This adds to the knowledge the ASA already holds that claims about chiropractic treatment for infant colic are misleading and reinforces their guidance.

Because the advertiser didn’t contest my complaint, the ASA decided to make this an informally resolved complaint. It therefore doesn’t go before the ASA’s Council for a formal adjudication. But the chiropractors still get a special mention on the ASA’s website (click on Informally Resolved Complaints).

Another crisis for the General Chiropractic Council?

While you’re there, look at the list of other complaints. A little further up from the Cliffs Chiropractic Clinic, you’ll see something even more interesting. This time, a complaint made by the inimitable Simon Perry, co-scourge of nonsense chiropractic claims, against the General Chiropractic Council itself for their Patient Information Leaflet. I’ll let Simon Perry tell the whole sorry story in his own words.

However, I see that even though the ASA ruled against the GCC’s leaflet, they still have it on their website (where the ASA have no jurisdiction)!

This is their revised leaflet: the GCC decided to tone down their leaflet earlier this year. It used to say:

You may also see an improvement in some types of

The ‘watered down’ version says:

There is some evidence, though more research is needed, that you may see an improvement in some types of:

Note the woolly weasel words. Now it seems even this is too much for the ASA!

What if the GCC leaves those claims on their website for all to see? Remember that it is against the GCC’s own rules for a chiropractor to claim anything that is not in line with the ASA guidance. If there was any doubt before, there certainly can’t be any doubt now about what the ASA thinks of such claims. So if the GCC leaves the claims there, are they not encouraging chiropractors to do something that is against their very own Code of Practice?

What an interesting situation that would leave them in.

68 thoughts on “I get anonymous chiropractic mail, I do!”